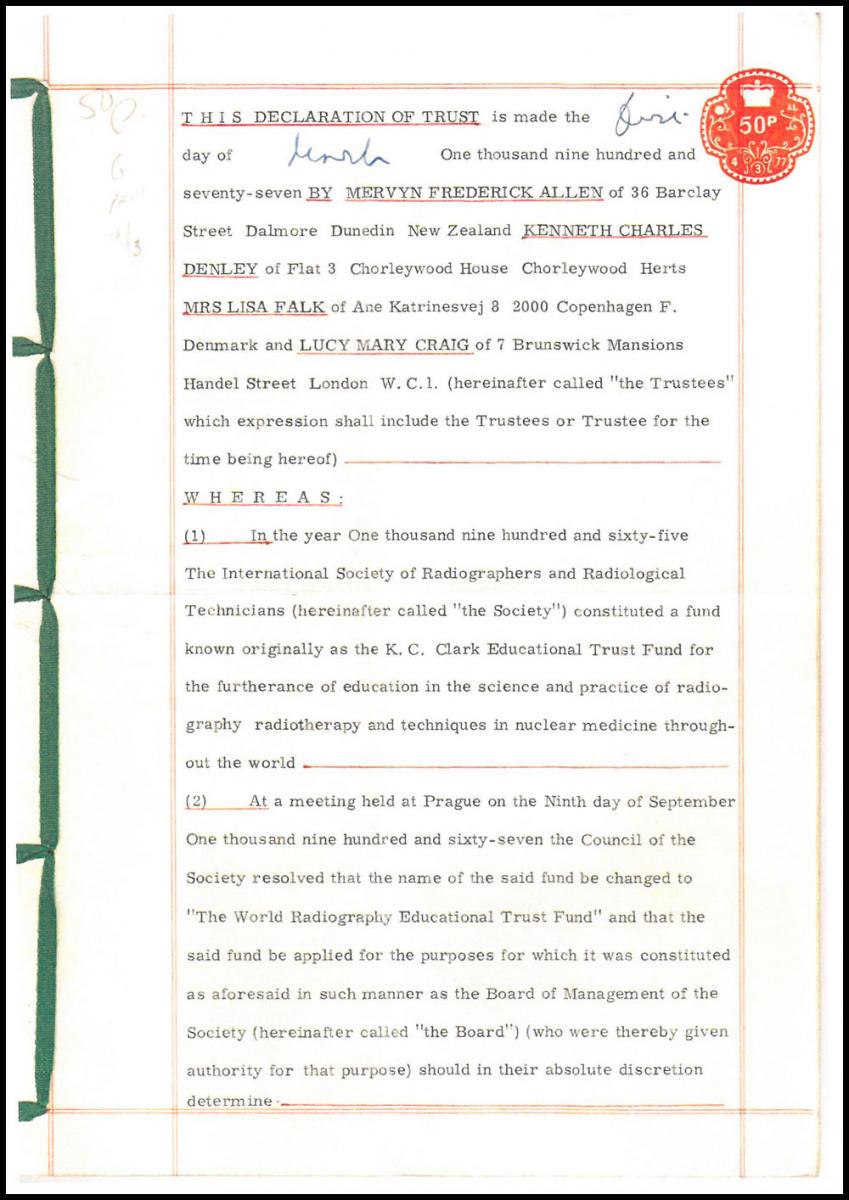 WRETF and the ISRRT have long history dating back to 1965 when the ‘Kathleen C Clark Educational the Trust Fund’ was set up by the ISRRT. The purpose of the fund was  for the  furtherance of education in the science and the practice of radiography, radiotherapy and techniques in nuclear medicine though out the world.

On October 1, 1969 the ISRRT board voted that the balance of the fund should be transferred, which was a sum of 2000 sterling, and vested in the first three names of the trustees together with George Christian Grossel.

It was also at this time, that the first donation was given to the charity of 25 pounds sterling and the World Radiography Educational Trust fund became an officially recognised Charitable organization.

The World Radiography Trust Fund established the  principle  that when income was sufficient or out of the capital of the Trust fund when if income is insufficient, grants, donations or awards such as bursaries or scholarship in pursuance of the objects of the Charity would be given.

Also, at this time the Charity established a Chairman, a Secretary and a Treasurer   who were to meet at least once a year and a quorum was established of three people to hold a meeting. Minutes were to be taken.

In 1992 the ER Hutchinson Book fund was incorporated into the Trust Fund.

On April 18, 2015 an addendum to the trust deed to change the name from ‘World Radiography Trust Fund’ to the ‘World Radiography Education Trust Foundation’. The objectives outlined in the original Trust Deed from 1969 were changed to include the new radiographic technologies, techniques and practices.

A mission statement was added, ’The World Radiography Education Trust Foundation (WRETF)’ is dedication to improving education in the science and practice of Radiography, Radiotherapy and Allied subjects throughout the world.

The Vision of the WRETF was also established l, ’To empower, develop and enhance radiography knowledge and skills in the international community of radiographers working in developing countries through providing resources, supporting and sponsoring opportunities.’

The WRRTF trustees moved to holding meetings twice a year and facilitated the attendance of trustees using a phone in or the medium WebEx to help control travel cost. The quorum was also changed to four trustees instead of the previous three.

The Chairman is now formally established to service a two-year term with a renewal of one more term allowing for a maximum of four year allow to be service consecutively.  The appointments of the new Trustees were also changed to allow for the Trust to make appointments and to have the ISRRT board of management ratify the appointment instead of making the appointments.

The Composition of Trustee  is to have at least seven trustees although eight  is preferable if possible and the term of office as that a trustee can be appointed is for a period of three years with the opportunity  to serve an additional two years making the maximum period of five years.