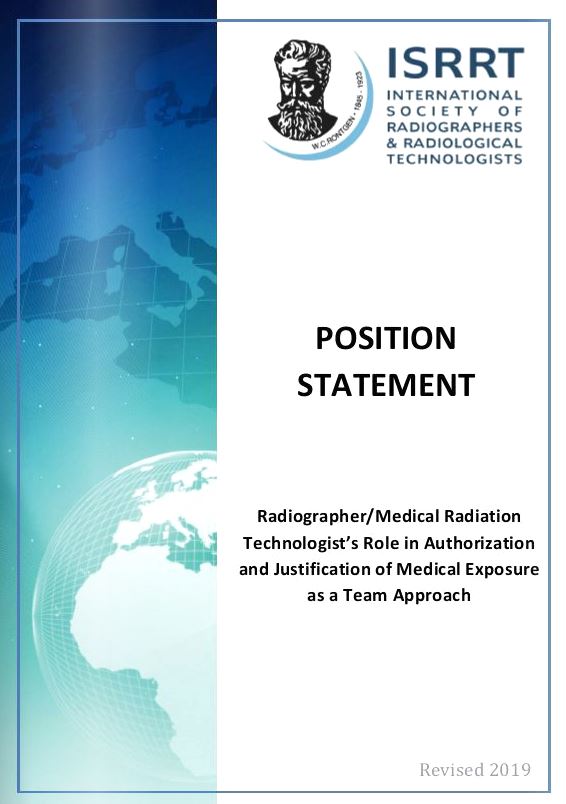 ISRRT's Position statment of the  Radiographer/Medical Radiation Technologist’s Role in Authorisation and Justification of Medical Exposure as a Team Approach.

The ISRRT considers Authorisation and Justification of medical exposure within the Radiographer/Medical Radiation Technologist scope of practice, subject to their demonstration of appropriate educational training leading to clinical competency to carry out the task as trained.

Radiographers/Medical Radiation Technologists play an integral part in the Authorisation and Justification of medical exposure process by communicating the radiation risks to patients and referring clinicians using evidence based data during their daily practice.

Supporting this position statement is the new International Basic Safety Standards (BSS) which was published by the International Atomic Energy Agency (IAEA) as General Safety Requirements Part 3 in July 2014.

The BSS covers four areas of responsibilities for the protection and safety of patients relating to Justification.  First, stating that the person or organisation responsible for facilities and activities that give risk to radiation risk shall have the prime responsibility for protection and safety. Also supporting from BSS is Paragraph 2.40 and 2.41 stating that other parties, such as the referring medical practitioner, medical physicist and Medical radiation technologist (MRT) (Radiographer) shall also have specified responsibilities. The BSS states that justification can be explained as the process of weighing the expected benefits of an exposure against the possible detriment of the associated dose. The benefit versus detriment may relate to the individual and/or to society as a whole.

The radiographer/medical radiation technologist as a result of their education and training obtain a thorough understanding and knowledge of Justification. It is within their scope of practice to help with the Authorization when the radiological medical practitioner (radiologist) is unavailable or a MRT/Radiographer working in accordance with the guidelines issued by the practitioner. Radiographer/ Medical Imaging Technologist authorization may be demonstrated by signing or initialing the referral in a predetermined place or by entering an electronic password. The employer’s procedure should describe clearly how authorization is to be demonstrated.

It is recognized that, in addition to radiologists, in some countries the MRT/Radiographer is permitted to act as practitioners for a specific range of diagnostic procedures. In every country, the MRT/Radiographer has a responsibility to contribute to the imaging team to ensure that patients do not receive additional exposure due to duplicate procedures or inappropriate procedures.  However, it is not feasible for a radiologist, acting as a practitioner, to review every imaging request and therefore appropriately entitled MRTs/Radiographers can authorise an exposure using written guidelines that a practitioner has written.

The ISRRT Board of Management promotes the scope of practice of a Team approach to Authorisation and Justification as safe and best practice for diagnostic imaging services.

www.isrrt.org, Flow Chart - Summary of actions in the process of authorization and justification of medical exposure to ionizing radiation