Two key things consumed Gordon Ryan’s life - work and family. Whilst he dabbled in many other pursuits he was not as passionate about any of them as he was with these two: -

He led his best life, the best way he knew and he loved his family and cared for the community.

He had his dreams and goals!

Gordon became a pioneer in his field. When he stumbled upon the chance to combine two of his passions, medicine and technology shortly after leaving school, the die was cast as he embarked upon a career in Radiology, despite his mother wanting him to pursue a career as a Violin

Gordon led some significant change in the development of this then a relatively new field and the underlying and emerging technology which was proving to be a boon to the medical fraternity, aiding in improving their diagnostic ability for the critically unwell. Back in an era where specialist trauma hospitals did not exist, the local hospital provided for all your medical needs and Bulli Hospital’s X-Ray department led much of this change across Australia, particularly in Radiology. For example, Bulli was the first hospital in Australia to have a Mammography screening unit and in doing so Gordon helped to save countless lives through the introduction of advanced screening techniques for breast cancer and its early detection.

Gordon received many accolades for his work in medical imaging and was the world president of the ISRRT (1985-89), President of the then Australian Society of Radiography and lectured regularly at Sydney University. He was awarded an Order of Australia Medal in 1991 by the then Governor General,

Admiral Peter Sinclair, in recognition of his 46+ years achievement and meritorious service to the Improvement of Community Health and Radiography.

After retirement life continued to be busy for Gordon and his much-loved wife, Lorna, who was a nurse. They travelled extensively, a pursuit that was inspired during his terms in ‘office’ with the ISRRT and various other official duties. His interest and enthusiasm for the ISRRT never declined. They loved the opportunity to soak up different cultures and embrace all that the world had to offer. They made friends and connections all over the world and I am very proud that I and my wife Alison were part of their community

Gordon lived a wonderful life, he was fit, healthy and mostly independent even after Lorna passed. However, he never really recovered from that sad event. Lorna’s passing was sudden and unexpected and left Gordon distraught but the proximity of family was a godsend for him and helped him through this difficult time and into the future

The natural aging process and deterioration in his health meant that he had to move from his family home into the nearby “Diggers Nursing Home” at Corrimal. Whilst not something he cherished, he knew that it was necessary and in the last 5+ had many hospitalisations. Most people in his age group would not have recovered from these events but ‘Houdini’ would bounce back every time after surgery and lengthy physiotherapy.

The Radiography community has lost an amazingly selfless, honest, loving, determined and supportive man who will endure in our hearts and memories forever. 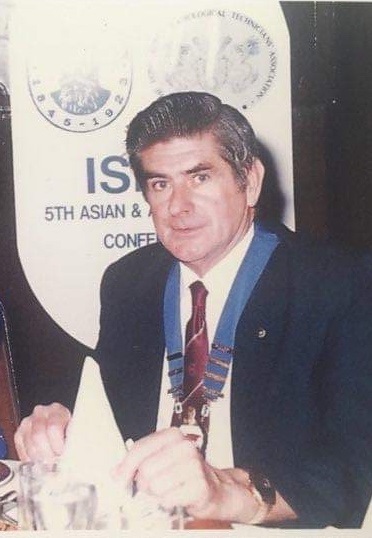